The History of Kitchen Cabinets Brisbane & Beyond

In the 1820s when Europeans started building in what is now known as the Brisbane region, home kitchens were viewed as exclusively the domain of servants. Servants generally had little say in how their workspace was designed, meaning kitchens of this time were a far cry from the functional, efficient, stylish spaces we know today. In fact, early Brisbane kitchens didn’t even have kitchen cabinets. Can you imagine the social hub of your house now without kitchen cabinets?

It wasn’t until the early 1950s that views on kitchens changed big time. Suddenly functional design and stylish aesthetics became a must for any new Aussie kitchen, and it’s no coincidence that it was about this time built-in kitchen cabinets became popular. From the late 1800s to the 1950s households had relied on multi-purpose, stand-alone cabinets popularly known as Hoosier Cabinets. However integrated, customisable cabinetry provided significant functional improvements on the Hoosier.

Kitchen Cabinets in Brisbane Since the 1950s

1950s – Brisbane’s population boomed in the post-war 1950s, resulting in many new homes being built. Kitchens installed in this era were often designed in a U-shape, meaning they had ample space for kitchen cabinetry. The focus was on making food preparation more efficient, and handy cabinets played a big part in that. Homeowners began ordering the precursor to today’s  customisable integrated cabinetry. Steel cabinets were very popular in the 1950s and they came in a range of sizes, designs and colours. The colour trend of the day was pastels – think apricot, creams and light blues.

1960s – In the 1960s things got psychedelic. Kitchen cabinets in Brisbane during this era were often simple timber, but everything around them was colourful! Picture acid green or burnt orange tiles paired with vivid lino flooring.

1970s – Brisbane kitchens were hit with some less than appealing colour schemes in the 70’s including combinations featuring brown, avocado and gold. Significantly the number and size of kitchen cabinets in Brisbane homes continued to expand during this decade thanks in part to cheaper air travel. Why? The exposure to global cuisines led to a growth in the food adventurism of Australians – correspondingly Brisbane households needed greater storage space for a wider range of kitchen items.

1980s & 1990s – wall-to-wall pine cabinetry was popular in the 80’s often featuring extra pine panelling on adjacent walls. In contrast, the 1990s saw milder colour palettes like cream and stone gain popularity, paving the way to the kitchens we know today.  Kitchens and kitchen cabinets continued to take on a bigger and bigger role, partly as a consequence of a national cooking fever, inspired by the precursors to today’s celebrity chefs.

Kitchen cabinets in the new millennium have continued to evolve into the sleek modern cabinet designs we know today. While timber is still a popular kitchen cabinet material in Brisbane homes, many cabinets nowadays are made from engineered wood products coated with a layer of plastic laminate. These materials make for affordable, strong and moisture-resistant cabinetry. Individual cabinet spaces have also become uber-functional with numerous design hacks built in like:

The Future of Kitchen Cabinets is Coming Brisbane

The Internet of Things is coming to Australian kitchens but what does that mean for kitchen cabinets?

Magically opening kitchen cabinets perhaps? In May 2019 Austrian hinge and runner firm Blum presented its smart kitchen concept at one of the world’s leading trade fairs. The range featured voice-activated cabinets, dishwashers and refrigerators that open and close in response to customisable commands. OK so it’s not quite magic, but we think it could be super handy when you’ve got dough-covered hands! This idea would appear fairly straightforward and presumably not too far away from real world implementation.

Other ideas are perhaps a bit less feasible, like the idea to create smart kitchen cabinets that know what they contain. This idea was discussed in a conference paper prepared by the Centre for Development of Advanced Computing in India. The paper authors looked at creating a smart kitchen cabinet which would store food items fitted with Radio-frequency Identification tags (RFID). The cabinets would feature an LCD display screen that would pick up signals from the tags, alert users when certain food stocks were low and, prepare an automated shopping list!

If you need new kitchen cabinets Brisbane, there are plenty of ideas from different decades – and the future – to embrace. The important thing to ensure is that the cabinetry works for you, and that it matches your overall kitchen design. 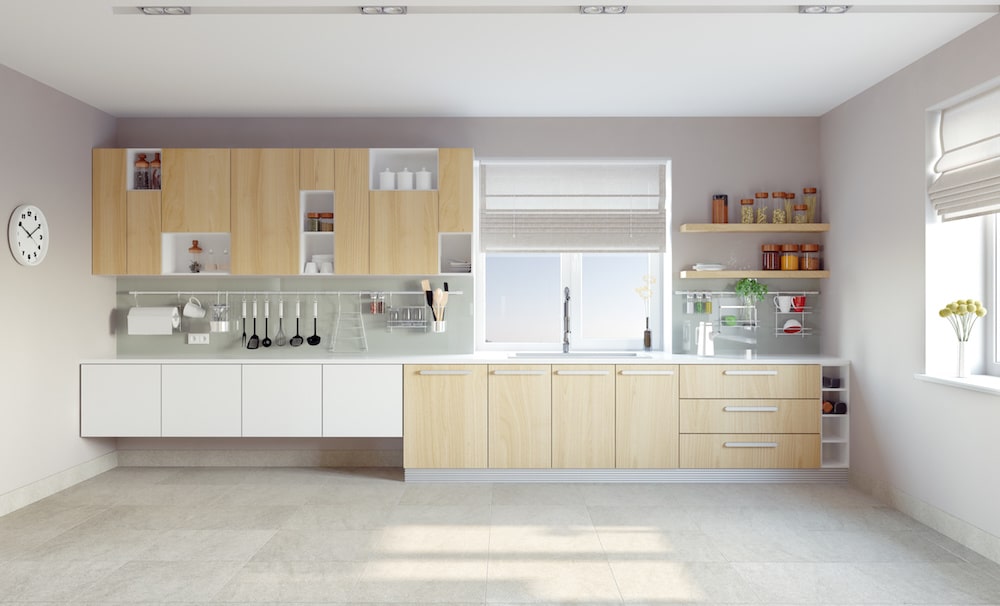 Want a Functional Kitchen this Year?

Kitchen Makeovers | Do You Need One?

How Interior Design Can Make Your Cheap Kitchen Pop